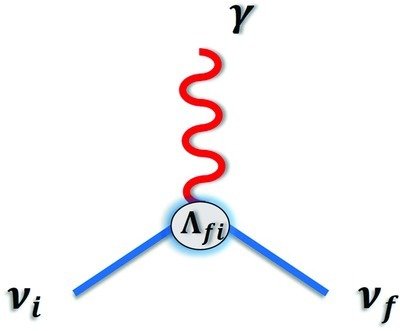 Neutrino Magnetic Moment (NMM) is one of the key neutrino's property since it would allow to disentangled the still unknown Majorana or Dirac neutrino's nature. Besides, NMM strongly depends on the Beyond Standard Model (SM) scenario chosen. In a Minimally extended SM, Majorana's neutrino has null Magnetic Moment, while in an Extended SM, it can reach values as high as 10-10 Bohr magneton. In the same way, the expected NMM for Dirac's neutrino changes five orders of magnitudes depending on the model.

To calculate the capability of vIOLETA to constraint this quantity, we have calculated the number of events expected from all Low Energy Neutrino Interactions (LENI) accessible by this experiment. Thus, the events originated in the weak interaction process and CEvNS were computed. Besides, background events were accounted for by adding a rate of 1 kdru in the full range under consideration.

When all these contributions are taken into account we get the spectrum in the figure. As in previous analysis, Quenching from CONNIE2019 was applied to both weak and EM interactions that produced nuclear recoils. For electron-neutrino interaction, the binding energies play a similar role to the nuclear quenching. It is responsible for the steps in the red curve.

At very low energy, the CEvNS expected events are pretty similar to the one expected by background, it means a 1 kdru rate. Thus, this channel twice the competing signal events. By contrast, weak interaction produced a negligible number of events at such low energies.

As a result we get a Bayesian upper limit as good as 10 -11 Bohr magneton after running vIOLETA for 3 years.